Four years after he last played in the Premier League with Liverpool, Coutinho made an instant impact on his return to England following his loan move from Barcelona this week.

Coutinho came off the bench midway through the second half with Villa trailing 2-0 after Bruno Fernandes’s double for United.

The 29-year-old provided the assist for Jacob Ramsey to give Villa hope with 13 minutes left.

Coutinho then converted Ramsey’s cross five minutes later to ensure Gerrard’s side made amends for their FA Cup third round exit at United on Monday.

Coutinho suffered a disappointing time at Barcelona, but Gerrard is confident he can bring the forward back to his best after playing with him at Liverpool.

“It was a good start. We’ve brought a quality footballer to the club. We need to get him up to speed in terms of his match sharpness,” Gerrard said.

“We certainly deserved to be trailing at the break. I had to tell a few home truths and the reaction was fantastic.

“We conceded against the run of play but didn’t feel sorry for ourselves, we continued to show character and believe.

“The substitutions really brought something to the game. The two goals we scored were fantastic.”

United have now gone two league matches without victory after losing to Wolves in their previous top-flight game.

With United languishing in seventh place, there will be fresh questions about interim boss Ralf Rangnick.

Rangnick had already endured reports that United’s players were unimpressed with his coaching methods and his backroom staff.

Fernandes owed his first goal to a howler from Villa goalkeeper Emiliano Martinez, who let his free-kick spill into the net.

The Portugal playmaker’s second goal was the kind of eye-catching finish that made his name when he arrived at United from Sporting Lisbon in January 2020.

But United couldn’t hold the lead in another blow to their bid to qualify for next season’s Champions League via a top four finish.

“It is difficult to accept this result after being 2-0 up and in quite a few spells of the game, I think it was the best performance since I arrived,” Rangnick said.

“In the first half an hour, we completely dominated and controlled the game on the ball. But again, when you are 2-0 up and throw away two valuable points, it almost feels like a defeat.”

Cristiano Ronaldo was absent from the United squad after the Portugal star was unable to train on Friday due to the hip flexor injury that also forced him to miss Monday’s FA Cup tie.

United made the perfect start thanks to Martinez’s blunder in the sixth minute.

Fernandes’ 25-yard free-kick left Martinez red-faced as the Villa keeper got both hands on the ball, only to let it drop through his legs and trickle over the line.

Lucas Digne made his Villa debut after signing from Everton this week and the French left-back was denied a dream start when David De Gea turned away his rasping strike.

United doubled their lead in the 67th minute when Fred seized on Morgan Sanson’s wayward pass and fed Fernandes, who blasted a ferocious finish into the roof of the net from 12 yards.

But Coutinho came off the bench moments later to completely change the tone of the match.

It was Coutinho whose incisive pass found Ramsey in the United area, giving the midfielder the chance to fire past De Gea from close-range in the 77th minute.

Ramsey returned the favour with a perfectly-weighted cross that evaded the United defence and gave Coutinho a simple tap-in at the far post. 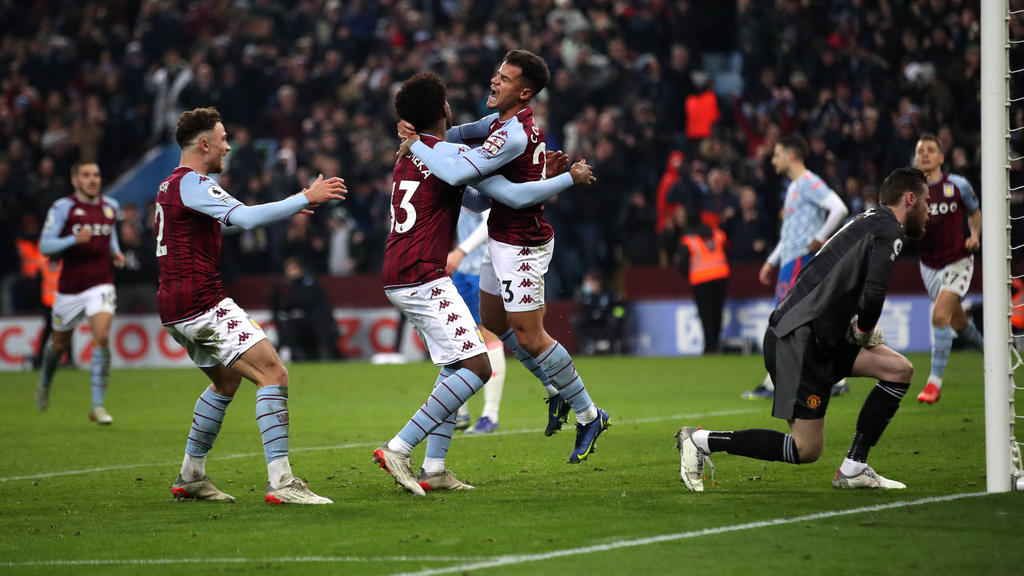